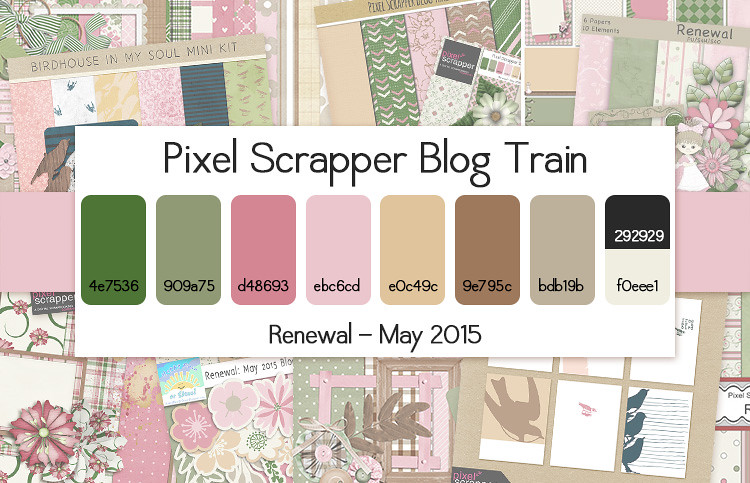 The image above is linked to the blog train thread at PixelScrapper, where you can find links to everyone else’s portions. I’ll link it in text again at the bottom of the post. As you can tell, there’s some gorgeous stuff in peoples’ previews.

I had an AWFUL time this month–dusty roses and tans just don’t inspire me, and while these colors lend themselves well to the classic romantic Victorian stuff, that’s just not who I am as a person. Where’s the sense in making a bunch of stuff that goes with the color scheme in a style that kills your soul, especially with a theme like renewal? So, like I said, I had an awful time with it, only being able to make some papers up until the 19th of April! Then I realized I could manage to make something centered around what personally renews me and get a decent kit out of it, by using everything but the pink for most of my part. A short list later, I was painting away in ArtRage with a reasonably defined plan, and I managed to get previews posted on PixelScrapper on the 27th. What a difference an idea makes, hmm?

Nature, playgrounds, photography, reading, good food, and coffee were the first things that came to mind once I started thinking about what gets me out of a funk, both physically and mentally. (So does a good massage, but I couldn’t think of a good item to show that.) The elements file ended up a little big due to the tree, but I’m quite happy with that tree and can see using it repeatedly, so I’m sharing it even if it IS a huge PNG file.

Once you’ve got my parts downloaded, head on back to PixelScrapper to go get the other portions! The ladies have come up with some beautiful stuff this month, even if it DOES have that dusty rose in it. I’m looking forward to downloading it and will probably end up using it to scrap images of my baby niece (almost 5 months old now). It might be useful for a quick card for my grandmother’s birthday, too, not that she’d necessarily even care with her dementia, but she still deserves a card even if I can’t visit.